NAHA — During the Battle of Okinawa in 1945, close to the end of the Pacific War, U.S. shelling on the main island of Japan’s southernmost prefecture was so intense it came to be called the “Typhoon of Steel.” And even 76 years on, there are still unexploded shells being found nearly every day.

In fiscal 2020, Japan Self-Defense Forces (SDF) personnel were sent out to dispose of unexploded World War II ordnance 650 times. That’s nearly twice a day on average. And yet there are an estimated 1,900 metric tons of unexploded shells still out there. Many locals have been killed by the shells going off. The deadly inheritance of that fierce and terrible battle all those decades ago continues to lurk beneath the island’s surface.

The SDF on June 9 arrived at what was previously the U.S. military’s West Futenma Housing area in the Kiyuna district of the city of Ginowan, Okinawa Prefecture, where a U.S. 5-inch shell fired from a naval gun had been found in April.

The SDF used a crane to lower the 12.7-centimeter, 35-kilogram shell into a hole 6 meters deep and 2 m across that the disposal team had dug. Once the shell was in the hole, the team used a special tool to destroy the fuse. 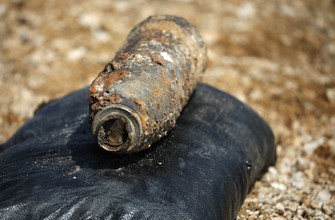 A U.S. World War II shell with its fuse removed and destroyed is seen in Ginowan, Okinawa Prefecture, on June 9, 2021. (Mainichi/Shinnosuke Kyan)

”Prepare for detonation. Detonation!” SDF troops call out in unison, followed by the boom of an explosion.

”We disposed of the shell smoothly and safely,” says Yuta Sakamoto, chief of the 15th Brigade’s 2nd disposal unit. “Diffusing an unexploded shell is always nervous work, but I’m glad to be doing this for the people of Okinawa Prefecture.”

The U.S. military returned the former housing area to Japan in 2015, and it is now a construction site for the future home of the University of the Ryukyus’ Faculty of Medicine and an attached hospital. According to the prefectural government, the 5-inch shell is the fourth piece of unexploded ordinance found and disposed of on the site. Shell casings and hand grenades have apparently also been discovered.

The Battle of Okinawa began in late March 1945 and ground on for some three months. And in those three months, U.S. forces unleashed an immense volume of bombs and shells on the main island from the sky, sea and land. This “Typhoon of Steel” killed many of the prefecture’s residents and Japanese soldiers, and was so relentlessly violent that it altered the landscape itself. The U.S. military is thought to have expended some 200,000 tons of ammunition in the battle, 5% or 10,000 tons of which did not explode, burying itself instead in the earth and seabed. 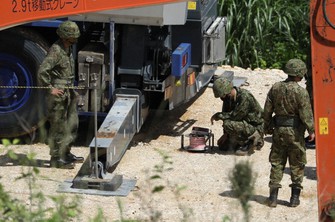 Japanese Ground Self-Defense Force personnel prepare to detonate an unexploded U.S. shell from World War II after defusing it in a hole, in Ginowan, Okinawa Prefecture, on June 9, 2021. (Mainichi/Shinnosuke Kyan)

According to a prefectural estimate, from the beginning of the American occupation of Okinawa in 1945 to its end in 1972, some 5,500 tons of unexploded ordnance was disposed of by residents and the U.S. military. From Okinawa’s return to Japanese sovereignty in 1972 to fiscal 2020, the SDF disposed of another 2,094 tons. Subtracting the 500 tons of shells thought to be buried so deep in the mountains and under the seabed that they will likely never be found, there is an estimated 1,906 tons of them still lying beneath the earth.

The SDF has disposal units on standby 24 hours a day, which take unexploded ordnance reports from the prefectural police. For calls on land, the Ground Self-Defense Force (GSDF) responds, while the Maritime SDF deals with shells found in the sea. Upon arriving at the scene, the disposal team checks the shell’s condition. Those too dangerous to transport are blown up or have their fuses removed on-site later. In fiscal 2020, the GSDF disposed of 12.8 tons of ordnance in 650 calls, while the MSDF took care of 1.65 tons in four calls.

If there are homes or roads close to the disposal site, then residents are evacuated and the roads are closed. In 2018, part of the Kokusai-dori main thoroughfare through central Naha, the prefectural capital, was shut for about an hour for a disposal operation. In 2010, an unexploded shell was found at a housing construction site in Naha. Severe corrosion made removing the fuse difficult, so the disposal team blew it up on-site. It was a densely packed residential area, so some 2,800 people had to be evacuated during the operation.

Many shells have not been retrieved before fulfilling their deadly purpose. According to official prefectural history, between fiscal 1946 and 1971, 704 people were killed by exploding ordnance left over from World War II, and 1,223 people were wounded. 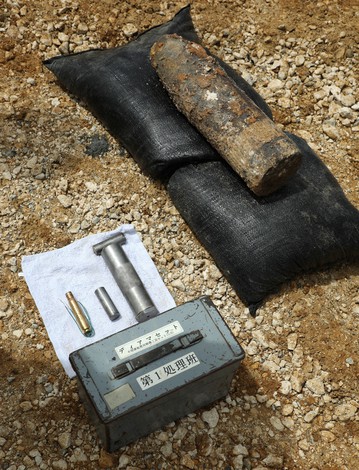 A de-armer tool is seen next to an unexploded U.S. shell from World War II in Ginowan, Okinawa Prefecture, on June 9, 2021. (Mainichi/Shinnosuke Kyan)

Incidents continued after Okinawa’s reversion to Japan as well. In 1974, four people including a 3-year-old were killed and 34 people injured when a Japanese Imperial Army landmine blew up at a sewage pipe construction site near a kindergarten in Naha. In 2009, an unexploded U.S. shell detonated at a construction site in the city of Itoman, seriously injuring at least one worker. All told, six people have died and 49 have been wounded by exploding World War II ordnance since Okinawa was returned to Japan. The danger is especially high at construction sites.

”It’s been 76 years since the Battle of Okinawa, but there are still buried shells waiting like time bombs, and no one knows when they will unleash their destructive power,” said Tahahiro Seto, the 53-year-old head of the historical office of Okinawa’s Onna village and author of the unexploded ordnance section in the official prefectural history volume covering the Battle of Okinawa, published in 2017.

”People say it will take another 70 to 80 years to get rid of them all, which means they’ll have been around for 150 years after the battle. You can see from the unexploded ordnance problem how many generations the war will impact.”