¡¡¡¡Arcades were a cultural institution in the 80s and 90s. One man made it his mission to build an accurate version of what may be the most nostalgic place on Earth, in his own basement. Minus the parent-wide panic of rotting brains and square eyes.

¡¡¡¡Fit with wood panel walls, arcade games, and even an “identical” carpet, the basement arcade is eerily accurate to the real deal. Reddit user Xray_Abby shared her husband’s handiwork to the “Gaming” subreddit and in eight hours received over 70,000 votes and 2,000 comments.

¡¡¡¡”My husband is so proud of his little 80’s arcade he set up in our basement,” she wrote. Later comments from the account clarified that the room is closer to a 90s arcade, after many noted the games seemed straight from that decade instead of the Pac-Man-obsessed 80s.

¡¡¡¡The image shared to the group shows the impressive machines, wood paneling, accurate posters and carpeting, but she shared that behind the camera is also a projector with a screen painted on the wall. While the nostalgic low lighting was created by “LED black light strips on the ceiling.”

¡¡¡¡”I love that he was able to do this for himself. He works hard and deserves to enjoy his hobby,” wrote Xray_Abby.

¡¡¡¡My husband is so proud of his little 80¡¯s arcade he set up in our basement. from

¡¡¡¡The room may look straight out of a legit throwback arcade, but the machines aren’t. Instead, they’re modified emulators, as confirmed by the poster in response to a fire hazard warning about real vintage machines.

¡¡¡¡”The Final Fight one he got at Walmart,” she wrote. “The Nat Geo and Pinball and Legend Ultimate machines that he got online. He also has [Street Fighter 2] Champions on the second floor. He got that for free from GameStop because it was a display and we made friends with the amazing workers there.”

¡¡¡¡According to follow-up comments, the Nat Geo machine has all Nat Geo games on it, so they don’t run the risk of becoming bored, as some commenters had warned.

¡¡¡¡While the modified machines may be impressive enough, the patterned rug has actually become the underdog of the whole project. Straight from a bowling alley, or more recently Stranger Things, the carpet has been dubbed “identical” to the childhoods of many commenters.

¡¡¡¡”It’s not perfect unless your feet kind of stick to it with all that black gunk that always ends up on these carpets. I don’t think i’ve ever seen one so clean,” wrote one Reddit user.

¡¡¡¡”Gotta make sure to blow cigarette smoke all over it for the real experience,” added another.

¡¡¡¡However Xray_Abby confirmed that the uncanniness of the arcade ends at the smell: “It smells like new carpet :(” she wrote, while confirming the rug is actually from Wayfair.

¡¡¡¡Luckily for the husband, she also enjoys playing games but “loses every time.”

¡¡¡¡”I do play co-op games though. His friends come over and play Street Fighter with him, so he has an even match. I play animal crossing and Pokemon Go.” 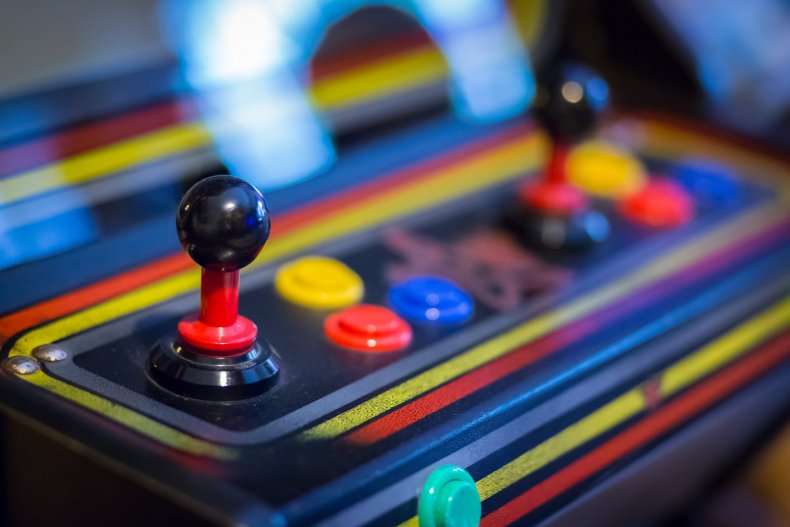 ¡¡¡¡Joystick of a vintage arcade videogame. A Reddit post has gone viral showing a man’s re-creation of a 90s arcade.