Since the launch of the Chromecast with Google TV back in October, it’s been downright bizarre that Stadia, Google’s premier game streaming service, was not available on the company’s newest streaming hardware. Instead, to (officially) play on TV, players were forced to purchase a Chromecast Ultra and Stadia Controller.

Google has now launched a proper “Stadia for Android TV” app into the Play Store, and we’ve spent a few hours playing with it and learning its ins and outs.

Original: Before we dive in, I need to note that the Stadia for Android TV experience we’ve used is not complete. Instead, since the app doesn’t launch until June 23, we’re forced to use a workaround to play. While this allows access to most of the Stadia app’s menus, there are still some things, like the account switcher, that won’t work for now.

Additionally, we have so far only tested on the Chromecast with Google TV, not a general Android TV device. Things will almost certainly be different on non-supported Android TVs and possibly even just between the Chromecast and other Google TV-based devices. We’ll be doing a much more comprehensive test of Android TV and Google TV devices in the coming days.

Update: Now that the Android TV app has gone live, we’ve given the app another lookover and updated, where needed, below. Notable changes include a slightly tweaked Google Assistant experience and a brief look at the in-app account switcher.

Another change I need to call attention to is that I originally reported issues with streaming in 4K, but this was found to be due to an incorrect setting on my Chromecast. I apologize for this error.

For months now, it’s been possible to sideload the Stadia mobile app onto an Android TV device and get an experience that can be described as “playable,” at best. If you’re expecting the Stadia for Android TV app to be an alternate version of the mobile app that’s been polished and optimized for TVs, you’d be quite wrong. 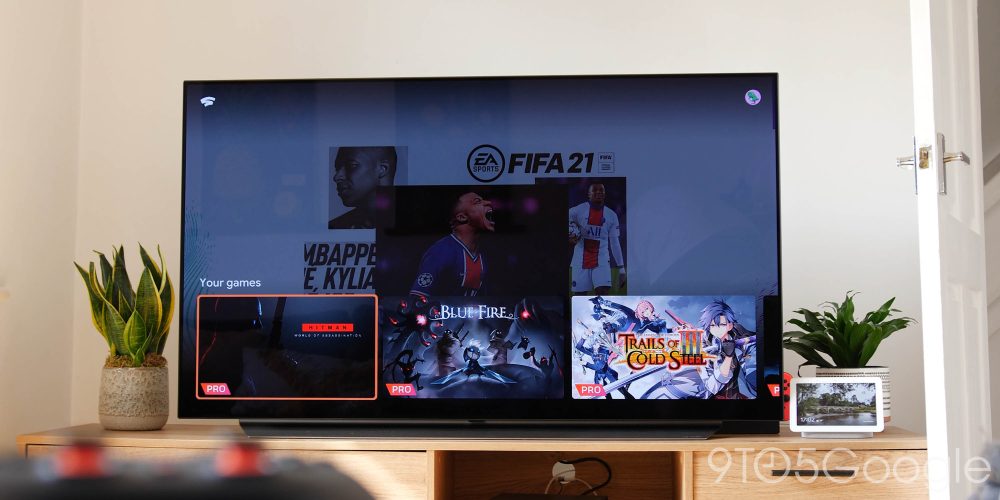 Instead, upon logging in to the Stadia for Android TV app, you’re greeted with an experience that is nearly identical to what’s offered on the Chromecast Ultra today. You’ll find the same basic set of features laid out in almost exactly the same way. There’s no access to the Stadia Store — this might change later; our APK Insight team saw the beginnings of being able to make Stadia purchases from a TV — or your captures. All you have are your games, a friends list, and some simple settings.

One major aspect of the app that’s different from Chromecast Ultra is the account switcher. On the Ultra, you can load your Stadia account onto your Chromecast and get a Stadia-themed UI to switch between accounts. On the Android TV app, you’re shown the classic TV-style Google Account switcher, which shows your email address rather than your Stadia name. This is a bit of a letdown, but definitely understandable.

On the other hand, the Chromecast with Google TV handles Stadia’s menus far better than the Chromecast Ultra, with animations feeling distinctly smoother in the Android TV app. We haven’t measured the actual framerates, but to my eyes, it feels like the difference between 30fps and 60fps.

Of course, the most tangible improvement Google’s made by comparison to the Chromecast Ultra is support for other controllers. Where the older streamer only supported the WiFi-powered Stadia Controller, Android TV and Google TV devices can use just about any controller that you can plug in with USB or connect via Bluetooth. Google’s support for various control schemes even shows up in the menus. For example, the main menu with your friends list shows a particular button to press to close the menu. Depending on what controller or remote you’re using, you’ll see a different button here, such as a label to press the “Xbox” button.

You can also theoretically connect a Bluetooth headset to your Android TV to keep your audio to yourself. In our testing with the Pixel Buds, though, we found an audio delay of about 0.75 seconds, which is far from playable. Stadia also doesn’t recognize the Pixel Buds as a headset but just a pair of headphones. Bluetooth is highly subjective though, especially on Android TV, so you’ll want to try your personal gear rather than taking my word for it.

Despite the incredible look-and-feel of Stadia for Android TV, the app is filled with quirks and oddities. The most glaring of these is the Google Assistant or, more specifically, its button.

When Stadia was first showcased in early 2019, Google offered a potential future wherein the Google Assistant could figure out enough context to show a clip of how to beat a part of the game you might be stuck on. To help make sure your help was always handy, the official Stadia Controller comes with a built-in Google Assistant button.

Fast forward to 2021, that Google Assistant button only works on Chromecast Ultra, with support never arriving for the Android app or the various web apps. On that older Chromecast, the Assistant can do its normal suite of smart home tasks as well as new tricks, like “Play Destiny 2” to load a particular game from your Stadia library.

On Google TV, a platform where all devices have a built-in Assistant button on the remote, Google has disabled the Stadia Controller’s Assistant button. To some degree, this makes sense as the controller connects directly to Stadia and therefore has no way to relay your Assistant commands back to your TV. The alternative would be to have an entirely separate Google Assistant experience from what is normally available through Google TV.

Thankfully, this should only be a problem in the short term, as Google has recently promised to bring support for the Stadia Controller’s Assistant button in a future update. 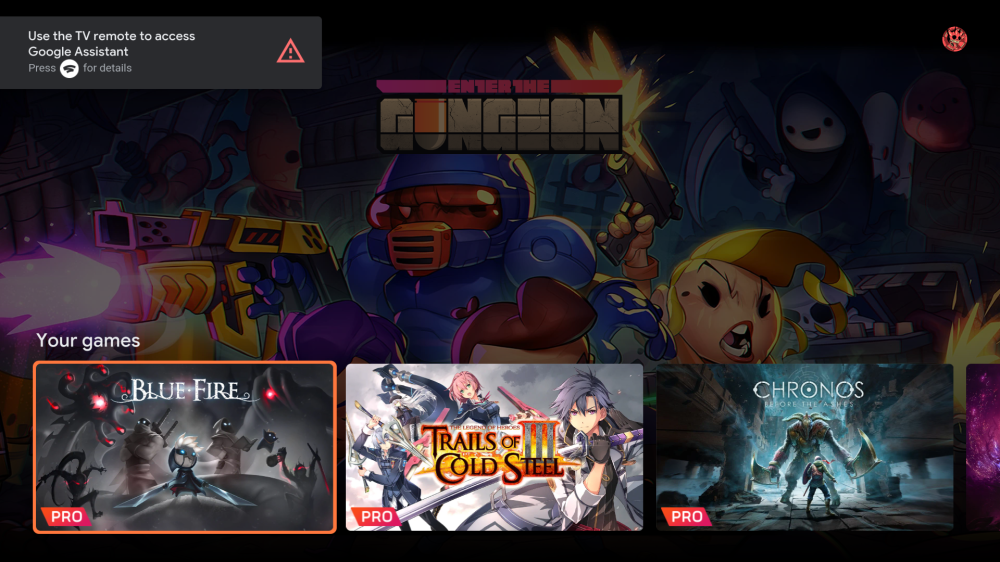 For now, the app directs you to use your remote’s Google Assistant button. After some hiccups on the first day, asking this Google Assistant to play a particular game — “Play Borderlands 3 on Stadia” — now works exactly as you’d hope, opening directly into the game.

Elsewhere in controller-related quirks, you absolutely can pair your Stadia Controller while the app is closed. So far, as I’ve tested, the pairing code does not seem to change, unlike on the web and Android apps. However, pairing your controller to the Chromecast with Google TV does not currently open directly to Stadia like it does on the Chromecast Ultra. More strangely, opening the Stadia app after pairing the controller causes the controller to quickly unpair and re-pair itself. Of course, menus and settings are all on the periphery. How does Stadia for Android TV actually handle playing games?

My home theatre and networking setup was optimized for Stadia, with a 300Mbps connection, a Nest Wifi with the Stadia optimization toggle enabled, and a brand new Ethernet cable between the Chromecast and the router. The average person’s home is not designed with Stadia in mind, so you may see some differences in your own experiences.

That said, from my couple hours of testing, Stadia for Android TV played flawlessly at 4K with HDR enabled. By comparison, the sideloaded Android app would see the occasional hiccup, and for the past year my Chromecast Ultra even refused to stably stream above 720p for reasons unknown. There was also no noticeable input lag with the Stadia Controller over WiFi or Xbox Controller via Bluetooth.

There is one notable exclusion however. In our testing, along with reports from the community, Stadia for Android TV currently does not offer surround sound, one of the core perks of Stadia Pro. According to Google, the Chromecast with Google TV is the only device that currently supports surround sound for Stadia via this app. 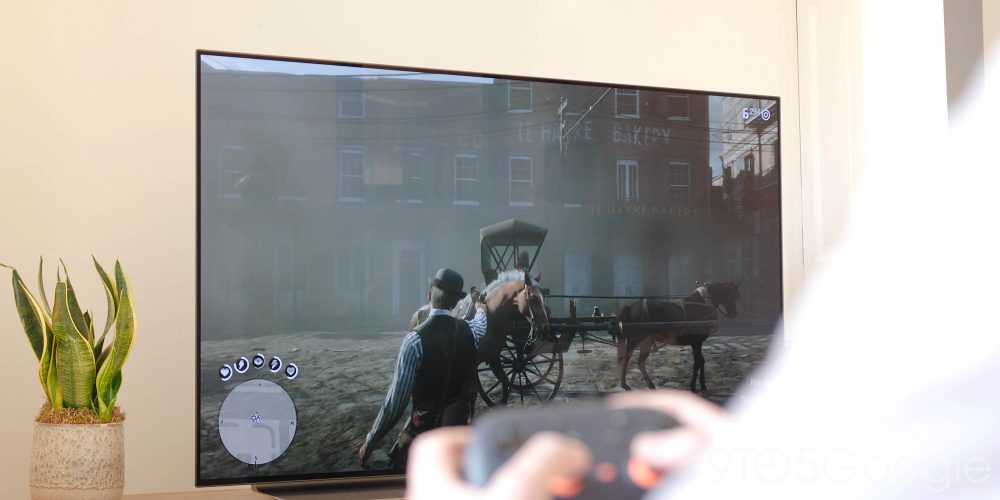 In playing via Stadia for Android TV, after a few weekends of mostly playing through GeForce Now on the same device setup, I’m reminded of all the reasons I’ve liked Stadia better in the first place. At its best, Stadia is invisible, feeling like a local console rather than a cloud service.

Lastly, I need to talk about a major pet peeve I have with Android TV that affects Stadia far more than I’d like. The Chromecast with Google TV remote has four dangerous buttons: Home, YouTube, Netflix, and Power. Accidentally pressing any of these will instantly disrupt your Stadia session and disconnect the Stadia Controller, if you were using one.

There’s no confirmation step. No few second window for your button presses to continue. Just an instant boot out of your game. Yes, you have 15 minutes to get back in before your Stadia session is closed on the server, which is great, but anything that can inadvertently break you out of “the flow” is not welcome.

Genuinely, all I want is for there to be a confirmation step before exiting Stadia via one of these buttons. For example, pressing the Back button today opens a simple menu with options to exit or resume your game. In all likelihood, though, this may be outside of the Stadia team’s control.

All said and done, the new Android TV app for Stadia, at least in its current state, is more than enough to get the job done. Google has definitely checked the box of bringing its streaming platform to Android TV and Google TV devices in a stable and consistent way. Now that there’s a stable base to work from, we hope that Google will gradually add new features and tweaks to better integrate Stadia with Google TV. 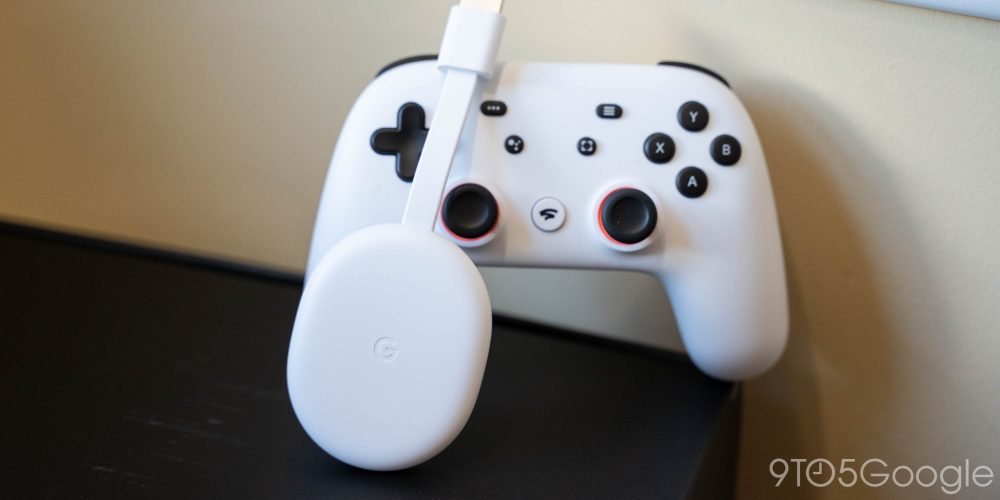 The biggest question many will have when it comes to this app is, “can I finally unplug my Chromecast Ultra?” I can say with confidence that the answer is yes, as long as you’re okay with a lack of surround sound on most devices and no longer turning on Stadia from the controller itself. Otherwise, Stadia for Android TV is a complete replacement — and, in some ways, enhancement — of the Stadia experience on Chromecast Ultra.

Since the app has now officially launched, I’ve unplugged my Chromecast Ultra and put it in a drawer.